If you have any queries about World Obesity Day 2021 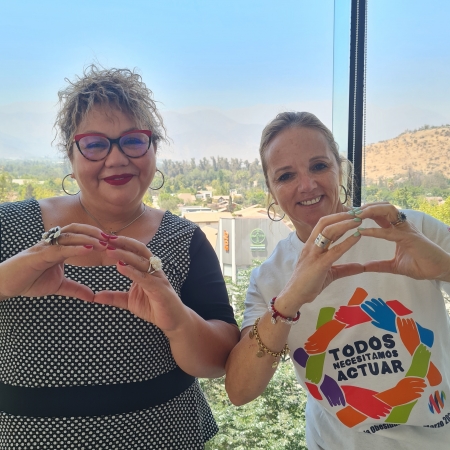 Select a link below to share on social media

Dr Ada Cuevas of the Centro Avanzado de Medicina Metabólica y Nutrición (Cammyn) in Chile speaks to Melyna about her experience of living with obesity and facing weight stigma. Watch their interview below (in Spanish).

Dra. Ada Cuevas: First of all, I want to thank you for agreeing to participate in this important worldwide day; World Obesity Day. We are striving to recognize obesity as a disease and that patients living with obesity are respected.

Melyna: I am very grateful and honored to have been invited. I am pleased to be able to share my personal experience and how I have lived with excess weight, and hopefully this can help other people.

Dr Cuevas: Tell me Melyna, at what age did you start having problems with being overweight or living with obesity?

Melyna: Since a very early age, and in adolescence I already had a few kilos on me, and after becoming a mother it got out of hand without [my] realizing it. I began to have problems like depression and other emotional problems and that led me to weigh up to 120 kilograms.

Dr Cuevas: What you say is so important, because often people – and unfortunately some healthcare professionals – blame it on the fact that someone "eats a lot" or "is lazy [and] doesn't move". It is good that you have mentioned those other aspects that people do not know as causes of obesity.

Melyna: Many people discriminate against us, thinking that the only thing we like doing is eating and eating. In reality, eating is like a drug, and we are addicted to eating. But there is a reason why we are eating.

Dr Cuevas: Yes, there is a reason…

Melyna: We eat for our sorrows, our joys, happiness, or any emotion that we have, we regulate them with food. When we invite our family, we welcome them with a table full of food. When we are sad at a wake, we also have to have food. So, we eat for the sake of our emotions, and unfortunately, we don't have access to psychologists. Many times, we do not know how to act and that is what makes us gain this weight.

Dr Cuevas: Exactly, deep down it is also important to know that these emotions, for example, sorrow, generate the release of certain hormones in the brain that cause these thoughts of wanting to look for something to calm you down, just as you say, like a drug that calms those emotions of anguish, fear, sorrow, etc. Very clear as you say.

Dr Cuevas:  Do you believe that there is discrimination against people? How this has impacted you in work, emotional aspects, or with your partner?

Melyna: Look, the extra kilos kill you physically, but society kills you before you reach that point, because it closes the doors to work thinking that having excess weight must mean you are stupid, that we cannot understand something or exercise a job or profession just because we have excess weight. That's in the workplace. Now in society, for the bus, you have to pay double tickets; on the bus when you sit down, people don't want to sit next to you. We are everyone's joke, and everyone has to laugh at us. Another example is when a large person enters a room (I prefer to say large person rather than obese or fat), people expect them to turn up in sandals and baggy clothes, and they are shocked when you turn up wearing a short skirt, dressed up with high heels. And why is that? Because “the fat woman” must dress a certain way, according to them. Society begins to shut you off and slowly destroy you. This depression means we end up shut up in our rooms and homes and we don't go out. And this is caused by the way society treats us. We have to be more empathetic, but not in a condescending way where we say, “look at that poor thing”, because being big does not mean being poor, being big is having a big mind too.

And regarding the double air-ticket that people with obesity were asked to pay some years ago, fortunately that is now prohibited. But clearly, in shared taxis (at least in Chile) the problem persists. In schools, there was also a study in the United States where children were given photos of who they would like their friend to be – a child with an obesity problem or a child with normal weight – and they always chose the child with normal weight to play with and become their best friend. So, it is a problem that comes from childhood.

Melyna: It is something that society tells us; we see the commercials, the television shows, [and] there is always a thin woman, a thin handsome man, those are the models to follow. Today I want to break with that; that's why I give talks with my excess weight – I have my entire community organized and that makes me neither more nor less stupid. It makes me an equal with everyone else.

Dr Cuevas: On the contrary, it makes you very intelligent and innovative. It would be good if you could tell us a little about that important program that you have developed in your community helping people, because curiously and unfortunately in our country, obesity is very prevalent in the most vulnerable areas. People with the lowest incomes are those who have more obesity.

Melyna: In these communities, we do not have access to medicine; it is very scarce. In “Bajos de Mena”, my neighborhood, we are 180,000 inhabitants in three square kilometers. We have two outpatient clinics and in each of them, there are two psychologists. Sometimes psychological care is just limited to receiving some medication for several years. Moreover, the conditions such as diabetes, hypertension and others are treated just with some medications, such as metformin, glibenclamide, or others. But they do not treat the root of the problem, which is obesity. So, what do the doctors do? They give pills for diabetes, but they don't treat me for obesity, which can lead to so many other diseases.

Dr.Cuevas: Of course, obesity leads to hundreds of diseases such as some types of cancer, kidney disease, neurological disease, myocardial infarction, and the list of diseases goes on. So, as you say, we have to fight so that the problem is approached from the root.

Melyna: That’s why we want obesity to be considered as a disease and to be included in "GES" (Chilean public health system) so that we can have access to treatment.

Dr. Cuevas: Fortunately, things are being done worldwide. Big companies are using models that are not the typical underweight female model. We hope that this tendency spreads everywhere and to our country.

Melyna: Many people see this as a war between thin people and large people! But the situation must reflect reality. We would all like to be thin and not burdened with any disease, but this is our reality. We need to have representation of the realities.

Dr Cuevas: Exactly, and we also need for people who have these problems to have access to treatment and for obesity professionals to help them. There are many bad experiences [when] you go to the doctor and he does not give you adequate treatment. I do not know if this has happened to you?

Melyna: It has happened to me many times where they tell me that the solution to obesity is to “shut your mouth". It's easy for them. It is easy to tell an alcoholic to stop drinking, a drug addict to quit drugs. You have to understand that, as I told you at the beginning, we regulate all our emotions with food [and] if it were that easy we would not have this weight. It is not easy to live like this, I have almost two people in my body and my daughter has three people. Look at the discrimination: my daughter wants to adopt and she went through a whole process to adopt a child the last time, but the adoption institution told her that she cannot adopt because "she is obese", and perhaps for that reason she will not be a good mother. You will not love your son because you have obesity? She will not take care of the baby because "she is fat"?

In other words, I'm not going to be able to be a grandmother because I'm overweight? It is this discrimination of society that continues to shut us off. Believe me, that child who is in an institution will not care that his mother has obesity. He wants her to love him, to be taken care of. Even in our desire to become mothers we are discriminated.

Dr Cuevas: Of course, how shocking.

Melyna: And that no one may go through this again. I thank you Ada, because we must make this more public [and] create networks. Many people are locked up in their houses who need a word of encouragement, an image, and to say, "if they can, why can't I?" "Why can't I show myself?" Believe me, we would all like to close our eyes, open them and be thin, [to be] able to pick things up easily, move easily. But today what we invite you to do is close your eyes, open them again and say, “this is who I am, and I love myself as I am”. Go out on the street, walk, begin to get to know each other, talk with others. Often, we do not have easy access to healthcare professionals, but we do have our friends and our neighbours who can support us with our emotions. Thank you very much for this invitation, believe me, it will do a lot of people a lot of good.

Dra. Ada Thank you very much Melyna and congratulations.

Training a new generation of obesity specialists in Nigeria

The Royal College of Physicians has released a hard-hitting documentary on obesity, and is calling for a National Obesity Prescription for England to improve care and reduce prevalence.